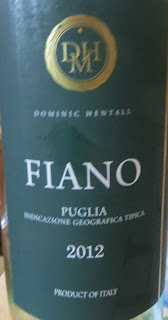 A curious thing has been happening in England over the last month.  It’s been sunny, not just sunshine and showers, but so sunny it’s been too hot.  Temperatures in the 30’s, day after day, with little rain, and that coming only in short sharp bursts.  It’s very odd, we British don’t know what to make of it.

I suspect the Italians are more used to this sort of weather, particularly those down in Puglia, the “heel” of Italy, so they’ve had more of a chance to think about how to behave, and what to serve under such circumstances.  They’ve had time to grow these Fiano grapes and turn them into wine for just such sultry evenings.

This is a fresh and excitable variation on Fiano, no careful aging here, it almost tastes of grapes.There’s a bit of peach blossom, and lots of squishy soft fruit, but with something that may even be a mineral zip to keep it from feeling flabby.

Resist the temptation to chill it til it hurts, as that will chill the flavour clean out of it.  Do put a second bottle straight into the fridge when you take one out, you may want another real soon as it’s dangerously gluggable.

Get a half price Naked taster case.