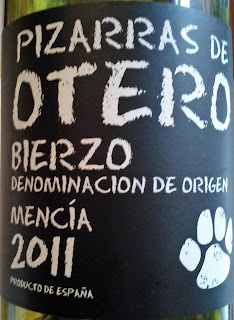 I bought this wine for no better reason than I recognised Bierzo from Villafranca del Bierzo, a beautiful town we’d cycled through on the Camino de Santiago.  I have vague memories of the vineyards around the town, but my strongest recollection is having been really ill the day before, and not wanting to eat anything in case of emergency.  Lycra really is not your friend if you have to make an emergency bathroom stop.

The wine was a rich, thick, deep red.  It smelled of dark autumn fruits with a little herbiness, almost as though it was from the south of France.

The dark fruits continued when I tasted it, along with something more like cherries, and strangely, just a touch of Bovril.  I know that should be a bad thing, the taste of boiled up bovine carcass remains, but it was actually quite positive, I suppose a kinder description would be Marmite, but really, it was Bovril.

At £7 from Majestic I thought this was quite a bargain, as you wouldn’t feel you were wasting it taking it along to a barbecue, but you could really enjoy a bottle with a rich tomatoey spaghetti meal, and its Bovriliness would no doubt accompany meat well.

Not all of the impulse purchases of wine I make just because I’ve cycled through the vineyards go well, but this one certainly did.

I didn’t hold that against the wine though, I was keen to try it, and this example comes from the good people at Bodegas Martín Códax who make a nice Albarino another day’s ride down the road towards the Atlantic Ocean.