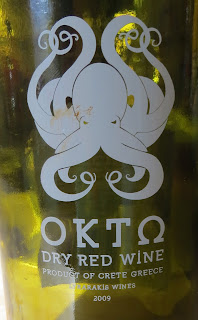 I admit, I bought this wine because I just couldn’t resist it, with the cheery octopus print on the bottle.  It’s Greek, so we had it with a lovely Mediterranean falafal flatbread salad.  It seemed like a good way to support the people of Greece in their time of austerity.

I’ve had some truly awful Greek wines and some utterly sublime ones, however, like all wine I suspect this one tastes best in its homeland, specifically Crete.  My budget didn’t run to that so we drank it in the kitchen.

Domaine Lyrarakis Okto Kotsifali from Berry Bros & Rudd smelled almost like a Cotes du Rhone than had run off to join the circus, and ended up in Italy.  There was fresh juicy red cherries and dark plums as well as a peppery spice.  There was a good hit of ripe tannins, along with some a little firmer.

It was dry, but with a sweet fruitiness, and a lively acidity.  I liked it, but it seemed to be doing a few different things at the same time, and wasn’t quite together.  I suspect it would have been best drunk last year when I bought it, but it’s been lying around, waiting for something to happen, Greek economy style.

At about £10 a bottle it’s OK, but not great, although I suspect if I drank it with some stewed squid, watching the sun go down on a terrace in Crete it would be the nectar of the Gods.  A rainy night in the English Midlands could never really do it justice.