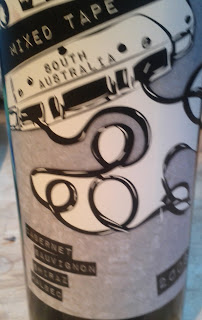 So it’s starting to look like there’s an ’80s music theme to my wine drinking.  This mixed tape wine label made me smile.  There was a time when creating the ultimate music mix, with just under 90 minutes to work with was an all consuming obsession.  Choosing the right songs was only half the battle.  Once you’d selected the exact right tunes from a good selection of bands, with some new music, some delightfully retro, some unashamedly populist, and just enough obscurity to maintain cool without crossing the line into insufferably hip, you then had to decide the running order.

Banging up a Spotify playlist just doesn’t feel the same.

So, back to the wine.  In some ways it felt retro too, from back in the day when I graduated from Hungarian wines, drained from the EU wine lake and bought on the cheap from Sam’s Mini-mart, to Australian wines, which were, in comparison, the height of student sophistication.

This Mixed Tape Cabernet Sauvignon Shiraz Malbec from Virgin Wines has power-ballad written all over it, whilst not quite turned all the way up to 11, it’s clearly dialled up pretty high, with flavour and alcohol fighting it out for supremacy.  At first I found it a little overwhelming, but after a while it settled down, or I did, and the flavours won out.  I think it might benefit from another six months to grow up a bit in the bottle.  I have another which I’ll leave for a while, and next time I’ll likely decant it and give it a chance to settle before drinking, I’m sure it will be worth it.