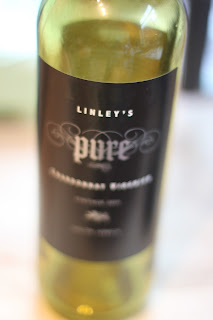 I must admit the idea of blending Chardonnay and Viognier wouldn’t really have occurred to me, but then, strawberries and balsamic vinegar sounded odd until I tried it.

I don’t normally go out of my way to buy South African wines either, as I live in Europe and I think I can generally get better value in low to mid priced wines with lower wine miles, and if I’m going to splurge I’ll splurge in the Euro-zone, after all, we need the money.

The label didn’t sell this wine to me either, a sort of emo/goth creation that looked like it may have been a draft sketch for a tattoo.

Linley’s Pure Chardonnay Viognier from Virgin Wines was just off dry with a gentle fruitiness, nothing too in your face, and neither the chardonnay or viognier dominated, each politely offering the other the chance to go first.  It was easy drinking and good for a summer barbecue where it wouldn’t be expected to be too bold, and wouldn’t be offended if someone put a few chunks of ice in it to keep it cool and reduce the alcohol.  Unfortunately it hasn’t yet stopped raining long enough for  barbecue in England this summer, and that doesn’t look like changing soon.