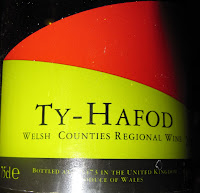 It’s Six Nations time so when England beat Wales last weekend we used the opportunity to drink a bottle of Welsh wine I’d picked up whilst in Wales. I’d bought it out of curiosity rather than with any great expectation of it being good, so we planned to limit any potential disappointment by adding the first glass to a Jambalaya I was making – it was Super-bowl weekend after all.
As I poured that cup I noticed that it had a surprisingly intense aroma, with apple blossom as a key theme. I snuck a taste, which out of a metal measuring cup didn’t really do it justice, but made me regret just a little chucking it in to cook the rice.
When I tried it out of a glass, the preferred serving suggestion, it was off dry, and the florality continued with a little more apple and pear flavour. It was delicate, but good, much better that I had expected and significantly better than it’s £5 price tag implied, particularly as English wines tend to be noticeably overpriced. At just 10% alcohol it’s also a good wine to have around when you want something lighter. I’d certainly try it again.