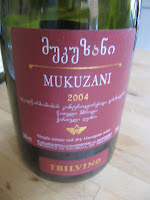 I was out and about for the tourist view of Leicester. I’m doing my best to visit all the tourist attractions in Leicester, today’s trip included the fabulous church of St Mary de Castro at which Chaucer got married and King Henry VI was knighted.
This wasn’t the highlight according to my guide though, excitement built for the visit to Newarke Houses where Daniel Lambert’s trousers are the most famous exhibit. Strange as it seems the people of Leicester are immensely proud of having been home to the fattest man in history, their jovial jailer Daniel.
Distressingly the trousers were on tour, so I only got to see his chair, stockings and shirt alongside a photo of two Blue Peter presenters, one in each trouser leg.
I cheered myself up with a stop off at Evington Wines, a wine shop that punches above its weight. I picked up a bottle of Georgian wine as although archaeological evidence suggests that Georgia is the home of wine production, I’d never tried any.
The store owner councilled against buying the sweet red favoured in Georgia, and we chose a dry style instead. It was interesting as an experiment, but not a great revelation. Maybe as Georgia’s economy picks up their wine making technology will improve too. I hope so.

One thought on “Tbilvino Mukuzani 2004”