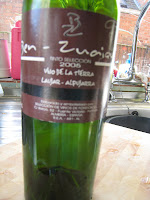 The nice people at Naked Wines sent us a bottle of Ben Zuaique Selección 2005 “Sirah y Merlot” so we gave it a go. The bottle looked pretty ropey, with a home-made looking tag on the collar, but there was a silver medal of some sort hiding behind it.
It was a deep, clear purple with thick lingering legs. It smelled clean with a medium full intensity, the aroma hinted that the wine was still developing. The dominant scent was of black cherry pie filling and a cinnamon pastry. I liked that.
It was dry with medium acidity and ripe, soft tannins. It had a medium-full body and intensity with alcohol at 13%. The black cherry pie filling was still there with some bramble leaves and something pleasantly meaty, along with caramel. The overall effect was rather like some individual plum parcels my mum used to bake, served with a cinnamon plum sauce. That flavour lingered well.
I really enjoyed the wine, and would not immediately have placed it as a Merlot-Syrah blend. It was different to a Rioja, but with some of it’s smooth chewiness, and different from a Rhone blend but with some of its engaging spiciness. I’d buy it again.