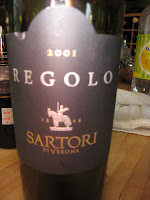 A recent house move meant finding lots of things I’d either lost or forgotten about. One of the nice surprises was finding wine I’d tucked away well under the stairs and wiped from my mind. One such bottle was Sartori Regolo 2001. It had probably been under there longer than was sensible, but I was excited to try it.
It’s a Valpolicella kinda thing made with partially dried grapes which give it deeper concentration. There’s slow fermentation too to make the most of the flavours and years in bottes, months in barriques, and in this case lots of years in bottle too.
It looked a little aged with some brick red around the edge, but still a deep mahogany core. It smelled deep and thick and oaky, but tasted surprisingly fruity, rather like a Christmas pudding rather than cake. That fruit has stewed for some time, with a little spice, so it’s hard to pick out individual flavours, other than the cherries, which are still there, and very much morello in flavour.
The 2005 vintage is on sale now at Sainsbury’s for around £10. I’d certainly pay that again, but I’m tempted to drink it this Christmas rather than waiting for the Olympics.