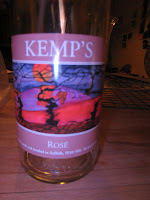 The World Track Cycling Championships are on, and they’re exciting. It hasn’t been the British medal-fest of recent years, but there’s some new riders coming through as well as some favourites from the Olympics.
Vicky Pendleton is however, still being amazing so we cracked open a bottle of pink wine to celebrate (although she’s not the rider with the pink bike and shoes).
I was given a bottle of Kemp’s Rose by someone who had been for a weekend break in Suffolk, seen it and brought it home for me. I like it when people find unusual wines for me. This one was unusual and my drinking buddy claimed he wouldn’t be suprised to learn it wasn’t made from grapes at all but some apples and raspberry jam. It was made from grapes, but an odd collection of one red and three whites. The red grape was originally from Russia so was presumably well set up for the winds that blow from the Urals direct to Suffolk.
I suspect this wine is at its best served very cold on a very hot day with a picnic in the park, rather like any local French rose you come across on holiday that sells cheap and sells out.