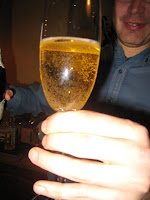 I’m moving house. It’s hard work, but as we pack things up, make space and fill space, I’ve had some interesting discoveries. We found a bottle of Martini Asti Spumante. I love Asti. I know it’s naff, but it’s really refreshing and cheerful. It’s youthful and fun. At least it normally is. Based on careful examination of the evidence, the bottle we found was at least ten years old. It had not been carefully laid down in a cellar, it was upright in a cupboard.
We gave it a good chance, putting it in a 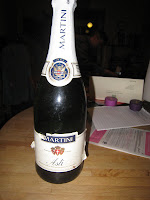 Champagne bucket, cooling it perfectly. It opened with a reassuring but not flashy ‘phut’.
It was a curious orange colour with a little fizz, more of a gentle sparkle than a heady mousse.  My test dummy declared it to look like Lucozade.  He also felt it tasted like Lucozade.  He likes Lucozade.
It did taste like it had once been Asti. There was a grapey taste, but it was slightly more raisin like. It also had a toffee flavour, but more like someone had dissolved a toffee in grape juice and put it through a Soda Stream. I don’t mean that in a bad way, it wasn’t unpleasant, just weird. I don’t think vintage Asti is about to break into the market.