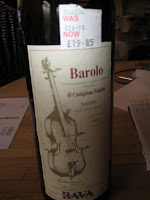 The credit crunch is biting hard in the world of wine, with everyone thinking about how to cut back on spending in different ways. I admit that looking out for bargain Barolo isn’t exactly bread-line behaviour, but I felt I was doing my bit for the economy by picking up a discounted bottle of Bava Barolo 2000 from Berry Bros & Rudd’s outlet store.
It looked pretty, a deep purple colour with just a touch of festive red around the edge. It smelled of cherries that had been run over by a truck on a hot summers day – tar and fruit, but no gentle floral scent. It had firm and ripe tannins with a medium level of acid. The cherry flavour came through with the tar, but again, it lacked the delicate touch of violets that make a good Barolo good. It may have had that flavour in the past, but eight is hardly a grand age for a Barolo.
We enjoyed it, it was interesting, something different and flavoursome. It cost £19.85, discounted from the retail price of £26.50. Was it worth it? Probably not. I could have bought two very good Chianti’s for the money, and enjoyed them just as much over two weekends. I couldn’t help feeling the name was carrying the price rather than the wine itself.