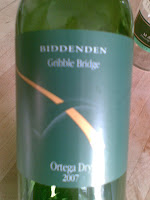 This weekend we headed out for a picnic in the grounds of a minor stately home, whilst listening to an entertaining and talented steel drum band followed by a fabulous Salvation Army band who put on a ‘Last Night Of The Proms‘ selection followed by the 1812 Overture with a mesmerising fireworks display. The whole event had been arranged by the Wigston Lions to raise funds for the local air ambulance.
We’d taken a picnic and wine to share sitting on plastic backed blankets and picnic chairs. Some people had dressed for dinner and had dining tables and chairs, complete with candelabras. We may have been under dressed and may have failed to bring flags to wave, but we had English wine, a Biddenden Gribble Bridge Ortega Dry 2007.
I’ve been to Biddenden in Kent, and went last summer so saw these grapes as mere buds. It was nice that I got to see them all grown up. A picnic may not have been the perfect outing, this is a wine best served quite chilled. It’s light and fruity with a touch of sweetness, much more German than French in character. At £7-8 a bottle it’s over-priced based on purely objective grounds of quality, but worth the extra to try English wine on a lovely English summer evening.