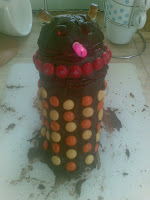 The new series of Dr Who launched last night. We celebrated with a dalek cake and a bottle of 2005 Leapfrögmilch from Frog’s Leap in California.
I’d spotted it in the bargain bucket at Berry Brothers and Rudd outlet store and it made me smile, the reduced price of £10 rather than the retail cost of £15 wasn’t exactly giving it away but I couldn’t resist.

The wine was strange. I guess that’s not a shock, the vineyards are on an old frog farm. I didn’t know you could farm frogs, but I suppose it makes sense.

It’s a Riesling Chadonnay mix, not one I’ve knowingly tried before. At first it seemed confused with a sherbet effect mixed with oiliness, but that settled down into a lovely peach and grapefruit zippiness, a wet peeble mineraliness and a a paraffin, well, Rieslinginess.

For a wine that’s bottled and packaged as either a joke on or a tribute to Leibfraumilch and the Blue Nun, this is a serious wine, and I’d definitely try it again.