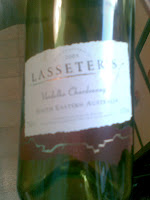 When a bottle of Lasseter’s Reef Verdelho Chardonnay 2005 arrived in a mixed case from Laithwaites, the primary reaction was – “Hey, cool, Lassiters, it’s probably the wine the serve at the hotel in Neighbours”. That’s quite a sad admission, but as Neighbours moves from the BBC to commercial TV advertisers will be happy to know that the reaction was universal across a wide range of demographic groups – even people who didn’t realise that Ugly Betty‘s boss’ dad was Kylie Minogue’s father-in-law!
The wine itself was a warm yellow gold. It smelled fruity, with pineapple being the most distinct aroma. Just dry, but with a fruity sweetness, it had just enough acidity. Reasonably full bodied, the bottle claimed 13% alcohol but it felt slightly higher. The pineapple flavour became more dilute in the mouth, to more of a fruit salad and boiled sweet taste with a slight butteriness.
This wine was an interesting alternative to Chardonnay, and easy drinking. It’s reasonable value  but not one I’ll be searching out.