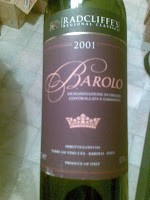 We had a Radcliffe’s Barolo 2001 this weekend. It had been hanging around in the wine rack for about a year, waiting for its opportunity to shine.
It was dark with a slight tinge of brick around the edge. 2001 isn’t old for an old style Barolo, but this one was made for relatively early drinking. It smelled of bitter cherries and a little chocolate with a reasonable hit of oak vanillins.
It was dry with high acitity and tannins, some soft, some still quite firm. Medium-full in body it had a rich blend of cooked cherries and vanilla, with a surprising hit of spice.
It certainly wasn’t a traditional Barolo, but at around £15 retail, or £10 as part of Threshers standard 3-4-2, slightly less with the Threshers voucher this week, it’s certainly not priced like a traditional Barolo, and makes for an enjoyable excursion.