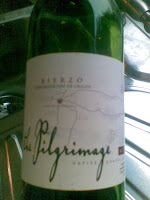 I’m a sucker for wines from places I’ve visited, doubly so if I’ve cycled through them, tripley (is that a word?) so if they have a cute name, so when I spotted The Pilgrimage Bierzo Mencia 2006 I had to buy it. It had a little map of the pilgrimage routes to Santiago on the label, a desperate ploy to make me buy it.
I’d never heard of Mencia grapes, but I didn’t feel bad about it, there’s lots of grapes in the world I haven’t tried. It does seem that I’m just in time though, it’s gaining a reputation and plenty of plantings to go with it.
This one was a bright, medium depth purple-garnet. It smelled fruity with black cherries and ripe plums, with something curiously, but not unpleasantly fennel like. It served up a whack of acidity and tannin, it felt a little young, and I suspect the tannins would soften a little in a year or two without losing the plumminess, but allowing some of the spice lurking about to come forward.
It’s drinkable now, but to make the most of my £7 (less 25% if I’d opted for a half case) I think I’ll pop a bottle under the stairs and drink it next Christmas.
I used the last of the bottle to poach some cherries, adding a little vanilla-sugar and cinnamon, topped off with a little grated 85% cocoa chocolate they were divine.