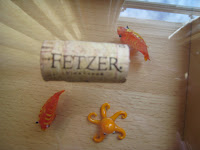 I found myself with hours to spare at the airport so settled myself into the lounge amongst assorted business types who were getting quietly toasted. One thing I have learned is that getting drunk on, or before, a transatlantic flight is a very bad idea – dehydration, disorientation and jet lag are all made much worse by a second drink.

But I was bored, I’d eaten my own body weight in carrot sticks and was awash with club soda and juice. There were three wine choices available so rather than make a decision I took a tasting pour of all three and settled myself down in front of an American football game. I know the Detroit Lions weren’t in it, but found it difficult to care who was in between the adverts.

The three wines were all Fetzer Valley Oaks 2005 vintage varietals from California. There was a Chardonnay, a Merlot, and a Cabernet Sauvignon. The Chardonnay was probably best summed up as ‘blah’. It was nice enough, a little over oaked, a little flabbly, a little too much residual sugar and some generic fruitiness. It seemed designed not not offend.

The Merlot was better in a very American market way. Big and fruity with lots of plum and cherry and just a little earthiness, sweet oak and very little tannin, it was smooth and easy drinking with no rough edges. The Cabernet was another middle of the road choice, a little sharper with more black fruit and a lttle more herby mintiness, again it felt like it had been developed after months of consumer focus groups to be a big seller at Costco.

For wine destined to be consumed by weary travellers who just want to relax, or build up some Dutch courage (what do they call it in the Netherlands?) these inoffensive wines are a safe choice.

One thought on “A Flurry of Fetzer”