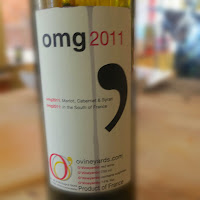 I have to concede that I wouldn’t voluntarily buy a wine that called itself OMG.  It’s been quite a while since I was a 14 year old girl so I tend not to say or type OMG terribly often.  I’m not quite sure that the message is meant to be.  The wine makers are O’Connells so they’re playing on the ‘O’ thing, but it’s not working for me.  I got a bottle as part of a mixed case, so I didn’t choose it, and the label made me think “party wine” rather than “nice bottle”.

That said, the wine isn’t as tacky as the name suggests.  It’s thick and dark and purple.  It’s fairly lively straight out of the bottle and benefited from a half hour’s rest.  It smells of blackcurrants and pepper.  There’s a good hit of acid, again, softened after a little time to relax in a decanter.  It’s spicy and has quite a mouthfeel.  It felt a little bigger than the 14% on the label.  It’s certainly not a light easy drinking wine, there’s plenty fighting for attention between the fruit, alcohol acid and spice.

For me it was a bit too much, those elements were all muscling each other around at the same time and didn’t really settle into one integrated drink.

It costs about £8 from Naked Wines, look out for Naked Wines’ Latest Offer.