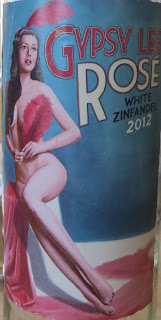 I’ll admit I’m not a White Zinfandel fan.  It strikes me as a waste of good Zinfandel.  It seems a shame that the UK imports lots of cheap, sweet, thin White Zinfandel and next to no scrummy fruity proper Zinfandel.  Never mind, we can get Primitivo from Italy, so we’re OK.

This White Zinfandel from Virgin Wines runs the risk of being extra horrid because it has both a silly name and a comedy label, usually two sure fire routes to disaster, but it was actually pretty good.  I say that with some caveats, but compared to your average American Pinko, I rather liked it.  Maybe the sun is getting to me.

It’s a cheery pink, but it smells of actual strawberries and redcurrants, rather than a 1970’s Angel Delight candified re-imagining of what fruit might taste like if it was possible to create it in a factory. It’s not offensively sweet, and whilst no-one would accuse it of being acidic, it does have enough acid to carry the fruit.

If you’re looking for a cheerful summer pink, that has some fun factor, and isn’t horrible, this could be the wine for you.