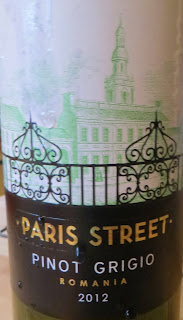 This bottle caused some confusion at home.  Was it ours?  Did someone buy it?  Was it something that someone brought for a party but didn’t drink?  Was it a bottle bought by the kids and accidentally mixed in with the general supply?  Nobody admitted buying it or knowing where it came from, but t was cold from the fridge so we opened it, very gingerly.

I’m not a wine snob, but this one did set even my snootiness alarm bells going.  Why would you call you wine “Paris Street” if it came from Romania.  What kind of trick are you trying to pull?  It’s not even as though it’s a French grape.  “Venice Piazza” would make a bit more sense.  I guess they hadn’t figured out how the teenage girl market might go wild for “Transylvanian Thoroughfare”.

It smelled vaguely of wine, in the way that most Pinot Grigio’s do.  I didn’t have a lot of hope, but it wasn’t bad.  It had a hint of fruit, and would pass for an Italian example.  It’s not a fabulous wine, and I wouldn’t knowingly pay the £7.50 list price for it, but it came in a Laithwaites bundle so I suspect a more realistic high street price would be £5.

What does disappoint me is the lack of pride and ambition from its Romanian makers.  This wine is as good as many Italian and French mass market wines, or any new world wines at a similar price point.  It’s only notable feature is that it is Romanian, so make that your USP.  Stick a vampire on it if you must, but better still give it a geographical name and a text only label and get out there and promote your Romanian wines with pride.