It’s springtime in Britain, finally.  Pale and pasty people are staggering out of their houses and into their 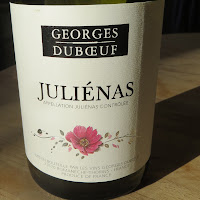 gardens, with only a slight squelch underfoot.  Plants are growing and weeds are thriving.  For some reason this time of year puts me in the mood for Beaujolais.  It may be because Deboeuf has trained me with his Flower Labels to equate blooming with buying Beaujolais, but I prefer to think it’s because Beaujolais expresses springtime with every swig.

Juliénas adds that extra touch of romance by claiming that it’s the region where the Romans first planted vines in Beaujolais, naming the area after Julias Caesar.  I’m a sucker for historical links to wine.

This Juliénas 2009 Georges Duboeuf Flower Label from Majestic is sweet, well, it’s not dry, and its not actually sweet, but for a European red it’s pretty sweet.  It’s a full on fruit bomb of fresh berries squished up with some blossom still attached, but not in a sickly kind of way.  There’s something quite grown up in there, spicy to an almost festive degree.