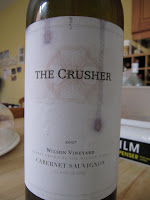 The nice people at Don & Sons sent me a bottle of their Crusher Cabernet Sauvignon. Having listened to the last few balls of The Ashes it seemed sensible to drink The Crusher to celebrate crushing the Aussies!
Cabernet Sauvignon is not my current favourite wine, having rather over-done it in the 90’s when varietals were the thing. This one looked interesting though, noting that it was made from the Wilson Family Vineyards rather than anonymous Californian grapes.
It was a garnet colour with reasonable legs, it had a medium light aroma, with vanilla and black fruits. Sweeter than your average European Cabernet it wasn’t unpleasantly sweet, and it had ripe soft tannins with a medium acidity. The flavour tended towards Merlot, with black fruits, but less blackcurrant than I expected. The was some mild mintiness, but it was dominated by the soft black fruit and vanilla oak.
This was a smooth and different wine, I enjoyed it and would pay the $12 it retails at.