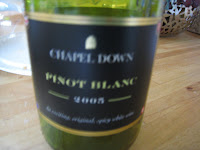 You may have just missed English Wine week, but never mind, you are allowed to drink English wine other times too, like maybe when England are playing a World Cup qualifier, even if it doesn’t look set to be much of a contest (although the England cricket team might have said the same before their match against the Netherlands).
We had a Chapel Down Pinot Blanc 2005 during wine week to celebrate. It was crisp and dry with a little crisp apple, some tropical fruit and a light spiciness. It smelled of grapes, not something I think very often when smelling wine. It was good, but it did have something of a two level flavour, with tropical fruit seeming to be a slightly different slice to peppery grapes. I was intrigued and looked up the data sheet. It seems two yeasts were used for two seperate vinifications, with the resultant wines blended back together. Maybe that gave it the half time split.
I enjoyed it, but wouldn’t have paid £11 if it wasn’t English. English wine is getting better all the time, and some of it is quite outstanding. I’ve certainly had English sparkling wine which outcompetes many Champagnes. The problem it has is cost. Whilst bits of Southern England have the same bedrock as important bits of France, and now a more appropriate climate for wine production than those same bits of France, land prices remain offensively high. England is small and lots of people want to live in it. France is big and not many people want to live there, and whilst that remains the case, English wine will struggle to compete.