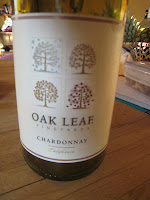 On a recent trip to a Wal-Mart in North Carolina I noticed a bottle of Californian Chardonnay at $2.97. Curiosity got the better of me. I had to try it to see just what it would taste like. Our expectations were low so we picked up some plastic cups and headed straight to the Kinston Indians Minor League Baseball where we planned on drinking it. We hadn’t thought that part of the plan through well as you can’t take bottles, or the picnic we’d stopped at Wal-Mart for, into the ballpark.
So we saved the Chardonnay for a while. Curiosity being a persistent little fellow, we soon wanted to try it. It wasn’t what I expected. It had crisp green apples, melons and a bit of pineapple, toasted oak chips, and a little more sweetness than my European palate is used to in a Chardonnay but not an unpleasant way. The flavours were a little separated out, not totally chunky, but slightly askew. That was only a minor criticism for a $2.97 wine. It is not possible to buy any kind of grape based wine in the UK for that money, and I’ve paid more than double that for far worse wines from New and Old Worlds.
Do I care that no-one wishes to claim these grapes came from their part of California? Do I care that there’s not only a mix of vineyards, but there’s also a mix of wines from different vintages? No I do not! Wine drinkers of America, don’t be snooty! Stick a few bottles of this in a bug bucket of ice and let people serve themselves at picnics, barbeques and garden parties. They’ll be happy and you won’t be skint.