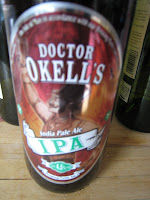 This week we’ve had the Tour of California to watch, and it’s been fun to see Mark Cavendish starting his season in style following a couple of stage wins in the Tour of Qatar. Sadly I don’t think there are any vineyards on the Isle of Man so we’ve been drinking Dr Okell’s India Pale Ale beer to celebrate instead.
Sainsbury‘s sell it in bottles and have awarded various palmares of its own. We bought it because it came from the Isle of Man (like Cavendish) so it was a great bonus to find that it’s really good (like Cavendish).
It’s pale but tastes darker if such a concept exists. It’s sweet and hoppy but with citric acidity that stops it being too sweet. I’m a little lost on beer tasting notes, so these are kinda wine biased, and I’ll admit I’m a bit biased to British Cycling, but Cavendish is really rather good too.