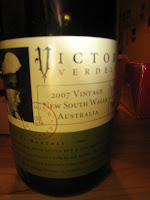 Victor’s Verdelho is a cool name. I don’t know who the Victor in question is, but I plan to save a bottle for the Victor I do know. I’m not a big cat fan, but I’m sure the label with a Dali-esque character with a cat on his hat will appeal to the kind of people who like that sort of thing.
The wine is hidden behind the label.  It’s a cheery lemon gold with a fresh smell of citrus and blossoms. It has quite a subtle flavour.  Could that be bland?  It could do with a bit more oomph (it’s a real word). The flavour that it there is enjoyable. It’s a bit like peaches baked with butter and cinnamon, but in a homoeopathic quantity.
It’s £7 a bottle from Laithwaites, if the flavour was more concentrated it would be worth the money, but at the current concentration level, I’d only buy it for people named Victor or old men who wear cat themed hats.