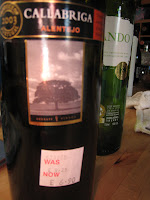 Europe in the summer of 2003 was hot. Iberia was particularly hot. I was busy cycling the Camino de Santiago, including strips through Rioja and Rias Baixas on either side of the forest fires. I felt sorry for the grapes. If they were as hot and dehydrated as me they would be suffering.
Portugal was further south, so hotter. That’s the kind of harsh upbringing this bottle of wine had.
It was a thick, dark, garnet colour, and it had gloopy legs. It smelled warm, like it was trying to radiate off some of that sunshine. It had cooked jammy fruit and warm vanilla and cinnamon spice.
It tasted fruity, less cooked, more cherry and plum with sweet vanilla. It surprised me with its freshness.
I picked it up at Berry Bros & Rudd’s Outlet store for just under £7. It was great value, as I’d happily have paid the £8.50 retail for it.