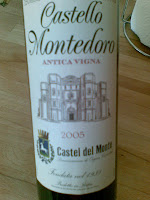 I like Italian wine. I like the way it’s often a surprise, I like the way it tastes like someone actually made it rather than it coming from a factory, I like the way that sometimes it’s a bit odd. I like how it makes me think about sitting in local bars in Italy drinking wine out of a tumbler and laughing happily with local folk who just don’t care that I don’t understand what they’re saying to me.
We had a Castello Montedoro 2005 whilst vegging out in front of Frasier.  Hardly the Tuscan hills or the glories of Rome, but enjoyable none the less. It comes from Castel del Monte, an absurdly pretty town in Abruzzo.
It tastes good. It has spicy oak and cooked cherries along with a slightly dried herbs character more at home in Provence.
At about £8 from Laithwaites it’s not an absolute bargain, I’d probably expect it to be closer to £6-7 to make it unmissable midweek drinking, but it made me feel happy, and that’s all you can ask from a wine.