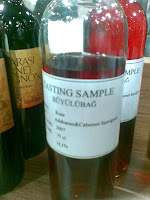 The European Championships have been a joy to watch. With no home teams to get excited or disappointed about I’ve been able to relax and really enjoy the football.
Turkey has been a big surprise this year. They haven’t gone out to win, but they seem to have done so consistently with almost comedic last minute heroics. I certainly didn’t think at the start of the Championships that I’d be rooting for a Turkey v Russia final.
The Turks have been making wine for an awful long time, probably longer than upstarts like Spain and Italy (who meet in a quarter final tonight), but despite producing most of Europe’s table grapes, they haven’t really exported their wine with any great success. If the controversial plan for Turkey to join the EU goes ahead it will be interesting to see how the wine market develops, but in a country that’s struggling between wanting a secular European future, and an Islamic state, wine could go either way.
I tried some Turkish wine at the LIWSF this year. They had quite a showing with many wineries looking for representation in the UK. It seems that whilst Turkish wine is available in Turkish restaurants and some specialist food stores, it’s largely imported on a personal level with no distribution deal in place.
My favourite out of a quick guided tasting tour of the stand was Buyulubag winery’s Adakarası – Cabernet Sauvignon Rose. It was a vibrant pink and oozed summery flavours of cherry blossom and raspberries, with a palate clearing zing of redcurrants.
I’d buy it to celebrate with Turkey if I could, but until there is a distribution deal in place I’ll just have to look out for licensed Turkish restaurants.