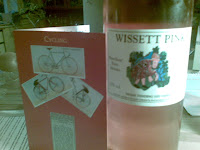 Mark Cavendish isn’t quite English, he rides for the Isle of Man, but he is British so he gets a big hurrah for winning a stage of the Giro. I don’t know of any vineyards in the Isle of Man so we settled for an English wine in Giro pink.
Wissett Pink 2006 is from Suffolk, but it tastes decidedly French. It’s off dry with a high acidity. There’s some strawberry, in a kind of Opal Fruits sort of way, and there’s more red fruit in a shop-bought summer pudding style.
It’s best served very cold on a warm evening with good company and easy conversation. It’s also the best still English rose I’ve tried as it does it’s job of being refreshing but not insipid, satisfying but not cloying.