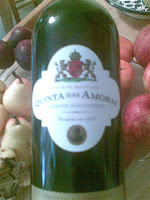 Sometimes a wine takes you surprise. Sometimes it’s because it’s a real treat, other times it’s a big disappointment.  Quinta das Amoras 2003 from Laithwaites surprised us by being white.  The bottle was thick and dark and the label oozed red-ness.  Amoras means blackberry in Portuguese so it wasn’t a totally dopey mistake to make.
After pouring a smidge we chilled the rest quickly, but the room temperature taster was promising. It had a pronounced fruit salad aroma and tasted of sweet, ripe peaches, pears and lemons. Chilled it felt more balanced, drier and fresher. The peaches were still there but the other fruit became more pineapple like.
It took a little more brain adjustment than I expected to switch from red to white tasting thought patterns, it just felt strange. The list of grapes in the wine is pretty strange too, with chardonnay well down the list and the only variety I’d ever knowingly tried. The wine was a hit though, and I’d certainly try it again, although I’d like to be better prepared.