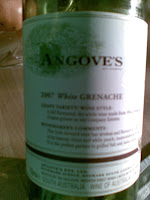 I was surprised to find that Angove’s White Grenache 2007 is, in fact, white. Ordinarily I would expect a ‘White Grenache’ to be a candy pink, semi-sweet concoction from California. The only other time I’ve tried a white grenache has been as part of a Rhone blend with at least half a dozen other grapes mixed in.
This was just off dry but with kiwis and peaches and lemons. If I was asked to guess what it was I would probably have plumped for soemthing from Alsace, probably a gewurztraminer, not a great one, but a tasty affordable one.
It seems the Angove family like making off beat wines, and started out growing Grenache in Australia 25 years ago. Their efforts have paid off with an interesting and different wine that’s worth looking out for.