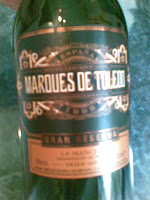 I’d really enjoyed a Marqués de Toledo Crianza a while a go, so when I saw the Gran Reserva I thought it would be good to give it a go.
The Marqués de Toledo Gran Reserva 1999 was a medium pale garnet colour, and smelled a little of boxed strawberries with blackberry jam. Medium bodied it had a medium level of alcohol at 13%, unfortunately, it had a a high level of acidity which wasn’t well balanced into the wine.
The fruit was faded, there was a feeling that it had once been fruity but overly tannic, and now those tannins had softened, but they’d taken the fruit with them. I’d missed the magical tipping point when everything was together in balance.
At £7 from Laithwaites it was a worthwhile punt, but I won’t be seeking it out in future.