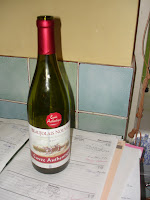 This weekend we opened our bottle of Beaujolais Nouveau 2007 which arrived Friday – we were concerned it might go off if we left it another week.
Explaining the concept to wine-curious teens wasn’t easy. It’s tough to explain why you’d rush to buy a wine that’s fresh off the vines when they’re used to seeing older bottles working their way through the kitchen.
The French have always summed up the Nouveau sales to English speaking countries as “Made early, drunk early, pissed early – paid early”, hardly a glowing guarantee of quality, but an honest reflection of the financial realities of wine production. Beaujolais wines aren’t all rushed out for the pre-Thanksgiving Thursday. There’s plenty of good ones released after a winter of relaxation.
Our bottle was cheerfully bluey-purple with a boiled sweet aroma. Dry, with a medium acidity and little tannin the boiled sweet flavour was enhanced with some raspberries and strawberries as well as a strange confectionery blend which got better with each slurp. 12% alcohol may have helped it get better. Our teen-tester described it as being like wine, just watered down a bit – quite an accurate description really.
Served cool with the intention of having just one bottle a year, Beaujolais Nouveau is a fun, gluggable, sociable wine. It’s fun to try wine from this summer’s grapes, you just shouldn’t pay a lot for it. This bottle came in at under £3 so I have no complaints.
My guest photographer considered it important to picture the bottle on the diary page of consumption. Look out for more artistically constructed images in future.