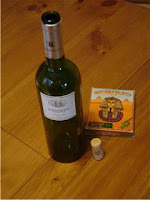 It’s getting cold, the nights are getting dark and so it’s time for sitting home with a bottle of wine and a board game.
I’ve recently received Archaeology, a new card game all the way from sunny Australia, so we tried it out with a Rioja. We opted for a Baron de Ley Club Privado 2001 Reserva. The bodega is only about 20 years old, but the grounds include an abandoned Benedictine Monastery from the 16th Century, which I’m sure would have some finds. I’ve happily cycled to all sorts of churches and monasteries in the Rioja area, but not this one.
The wine was a dark, velvety purple. It had plenty of rich American oak adding sweet vanilla and smokiness, dominating the black fruits. Dry with soft, ripe tannins and a medium-full body it was pleasantly rich with warming alcohol and the flavour held well.
That was a good thing as we played three rounds of Archaeology, each one playing out differently as we tried different strategies and the chaos elements of the game changed. I’ll play Archaeology again this weekend, but I may match it with another Rioja. Baron de Ley was good, and I’d happily drink it again, but not exceptional and there’s plenty more to try.