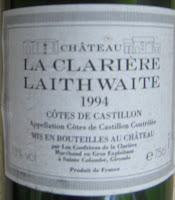 A strange challenge this week when I was asked to tell a friend everything I knew about Laithwaite’s. That wasn’t a huge amount, but it was more than enough for his purposes so I escaped with my wino reputation intact.
Relating this story at the weekend, another friend fished out a bottle of Laithwaites Château La Clarière Cotes de Castillion which had rested in the cellar (think damp basement rather than climate controlled sterile environment) for quite some time. It came with a natty little certificate saying his name had been inscribed in the cellars, which is sweet, but sadly doesn’t entitle him to go to the cellar and demand that we can drink whatever we like. Once up in the kitchen it quickly became clear that the certificate was home to a variety of small insects.
We decanted the wine as there was plenty of visible sediment, which had welded itself to the bottle. The wine was a pale mahogany colour, with quite an odd aroma. It smelled slightly of B&Q, which I finally pinned down to putty. That faded quickly and there wasn’t much else there. Dry with soft tannins it was clear that this wine used to have plenty of blackcurrants and forest fruit flavours, but they’d long since moved out, leaving a few marks on the walls where they used to be. It wasn’t unpleasant, it had just run out of flavour a while ago.