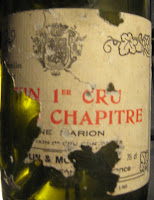 This weekend I picked up a copy of Pillars of the Earth board game on a whim. Players need to take the glory for building a fabulous medieval cathedral.
Following the historical theme, my opponent pulled an elderly Burgundy out of the cellar. The label had mostly disintegrated, but forensic examination placed it as a 1er Cru from Chapitre and some careful backtracking to establish a purchase from Laithwaites dated the vintage as a 1988.
The cork showed the wine had edged it’s way along, but hadn’t completed a bid for freedom. The initial aroma was dominated by acidity but after decanting and an hour or so to settle down it dissipated. Most aromas went, there was very little on the nose except a soft smokiness.
It was dry with a high acidity, there were some soft tannins. The fruit had died long ago, leaving a curious, but not unpleasant flavour of smoke, old wood, tobacco, and something just a little bit like gone off Bovril. My opponent suggested that if we’d been given it in a totally blind tasting of assorted drinks he may not even have identified it as a wine. It was a fair observation.