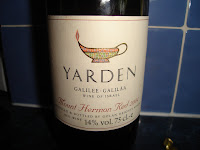 I’ve tried Kosher wine before, it was beastly, but I’d heard that Israel was now making wine that’s drinkable for pleasure rather than ritual. Tesco had a bin end of Yarden’s Mount Hermon 2004 from the Golan Heights, marked down to half price and piled up with bruised fruit, presumably post-passover, so I thought it give it a go.
I was surprised to find it was quite a drinkable Bordeaux blend. Heavy on the Merlot it had plenty of fleshy, plummy damson fruit, with a little blackberry and blackcurrant. It was fairly tannic with some firm and perhaps underripe green tannins making it a touch harsher than it needed to be but not to an unpleasant degree.
They added a pepperiness which went well with the ricotta and spinach lasagne we had it with. 14% alcohol added some heat.
At £4.50 this was a great value midweek wine, but I wouldn’t pay £9 for it.