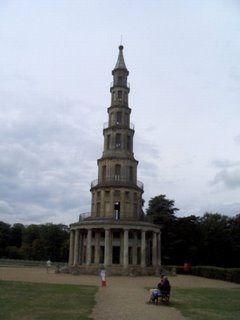 I spotted a wine in a Spar shop attached to a petrol station, admittedly not normally my first choice wine merchant, but it was Champteloup Rose 2004 from the Loire valley. We’d cycled to Chanteloup, taking a reasonable detour from the river, on the way from Chambord to Tours. It’s a French folly, a Chinese pagoda in what was the grounds of a grand chateau, although the house has long since been demolished. The pagoda itself is held up with hope and would have a risk assessor in tears, but it’s fun.

OK so Champteloup isn’t Chanteloup, but it’s close enough and at £3.99, I suspected it was a reasonable attempt at passing-off.

The bottle is slightly fatter than normal, an aspect which I suspect doesn’t endear it to supermarket shelf planners. It has a screwcap, making it party and picnic friendly.

It’s a cheery pink, like the mouthwash at my dentists. It smells of boiled sweets in ‘red’ flavour – a strawberry, raspberry, chemistry-set mix. It’s off dry with more than enough acidity to neutralise a jellyfish sting. It’s light and lively with a slight prickle on the tongue. At 11% alcohol it’s easy drinking, but wouldn’t hold up well to food.

I enjoyed my Champteloup, it tasted like the cheap and cheerful wine that comes free with the plat du jour all along the Loire. It’s not a great wine, and without the association, it’s not even a good one, but I enjoyed it because wine is so much more than a score.